We are pleased to welcome three new arrivals to the lab recently. 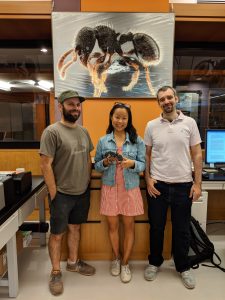 -Jamie Kass (left) is starting a term as a JSPS postdoctoral fellow coming from the US. He is an expert on species distribution modeling and one of the lead developers of Wallace. He is going to be working on our OKEON community monitoring data and also collaborating on other projects related to global biodiversity.

-Fumika Azuma (center), also coming most recently from the UK where she recently got a bachelors in geography from UCL, is the new technician in the lab. She has actually been here for a while as a research intern, but we liked her so much we convinced her to stay. She will be working on a range of tasks, but especially GIS, insect collection curation, micro-CT, and molecular work.

-Kosmas Deligkaris (right), coming from the UK, has a background in neuroscience and is now a computational specialist who will be working on computational support, data and database management, server admin, workflow design, and other related projects for the lab.

Welcome everyone and Gambatte! A new paper from the lab was published today in the Biological Journal of the Linnean Society focusing on aberrant spinescent phenotypes in Pheidole (including the famous dragon ants). We look at spinescence from a number of angles including phylogenetic, ecological, geographic, and 3D morphology. This study sheds light on the complexity of the issue of spine phenotype evolution. There are a number of open questions and some big mysteries. For starters, why the heck has spinescence evolved so many times in the Indo-Pacific, but no spiny Pheidole in New World? Check out the paper here! Understanding the drivers of biodiversity patterns is always difficult due to the fact that multiple factors such as environmental gradient and spatial connectivity might contribute to the species distribution and community composition patterns simultaneously.

In a new paper just published in Ecography, we (Liu, Dudley, Xu and Economo) evaluate the effects of environmental gradients and spatial connectivity on ant taxonomic and phylogenetic diversity patterns along a 5000m elevational gradient within a complex mountainous landscape in Hengduan Mountains, a biodiversity hotspot in Southwest China. We found that environmental gradients dominate variation in both alpha and beta diversity in this landscape, with alpha diversity strongly declining with elevation and beta diversity driven by elevational differences. We compared our system to predictions of a recent theoretical framework (Bertuzzo et al. 2016; PNAS) which synthesizes how aspects of landscape geomorphology may drive biodiversity patterns in idealized mountain landscapes. Our findings did not match the theory, we found alpha diversity is monotonically declining and within-band beta diversity is invariant with increasing elevation, but point toward ways to improve the theory. Taken together, our results show how elevation-driven environmental gradients, spatial factors, as well as landscape geomorphology together affect ant metacommunity structure in a complex mountainous landscape. Original paper can be found here